I used to play video games all the time as kid, but I stopped when I was 14 or 15. It's just not the same anymore. I can't get into the games. It just looks corny and too unreal now. 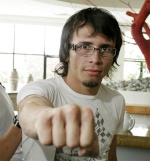 PapiChuloLeon wrote:I used to play video games all the time as kid, but I stopped when I was 14 or 15. It's just not the same anymore. I can't get into the games. It just looks corny and too unreal now.

I'm having a hard time working out any habits/rituals/hobbies I gave up on as I got older.

The only thing I can identify was my ambition to become a Vet, that I gave up on. It was the only occupation my grades weren't good enough to get into. I never dreamed that becoming a Vet would be far, far harder than becoming a doctor or lawyer.

As for videogames, depends on what kind we're talking about. I play things from my youth and the nostalgia does half the work for me. If you're playing Zelda for example, you expect it to be corny and unreal. Who wants to live in a world where all movies, games, books etc reflect our boring and monotonous world?
_________________
You entered Ayase Manor. Room topic is: Pain is Temporary, Pride is Forever.

ˎ͓͜٨͓ˏ Darden Evageline.: As you said before, 'girls become bored'.

Dr. ARM has been kicked by Kira Ayase.

I can't get enough of Super Smash Brothers in any of its incarnations. It's just way too much fun.

I'm a sucker for the ancient Nintendo stuff. I used to love it all, I still do to a certain extent but pretty much practicing at music has been my thing ever since I was... 12?

I kind of wish to see what it was like if I hadn't taken it up. I don't even see many of my old friends anymore.

partying - I actually miss this one sometimes. OK, not so much the week-long acid trips or 3-4 day ecstasy parties but more of the social aspect. Although the whole lifestyle was pretty much carefree. Yeah, can't do all that now...job, family, responsibility.

dreams - yeah, I've finally given up on a few of those. I won't go into details but it's safe to say I'm not going to be a rock star.

No, but there are some dreams, hopes, aspirations...whatever, that I have let go. I'm still clinging to a few though.

Guest
Title : Master of All